The latest progress of Baling Petrochemical Coal Chemical Project with a total investment of 13.95 billion yuan

There are a total of 173 large pieces of equipment in the project, 51 of which have been hoisted so far. 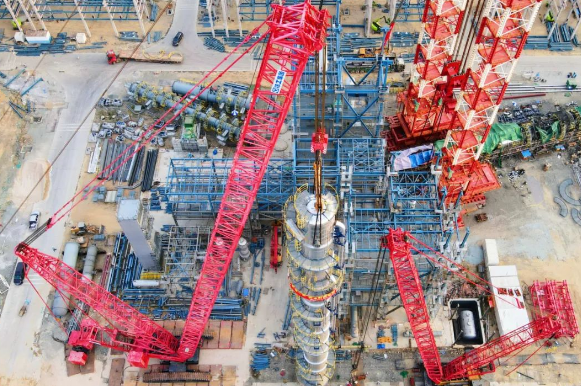 The caprolactam production units are centrally arranged in the middle of the plant and are divided into Line A and Line B. Line A runs parallel to line B.

Coal to hydrogen scale 192000m3/h (CO+H2). The coal-water slurry is used to produce gas, and ammonia synthesis gas and hydrogen are produced as a complete set, and sent to downstream industries. A line construction.

Synthetic ammonia uses nitrogen and hydrogen from the coal-to-hydrogen plant as raw materials, with an annual output of 333,000 tons of liquid ammonia. A line construction.

Sulfuric acid production Using the “two-turn and two-suction” process, the annual output of 104.5% sulfuric acid is 660,000 tons. A line construction.

Polyamide Using caprolactam as raw material, with an annual output of 150,000 tons of polycaprolactam. A line construction.

The total investment of Baling Petrochemical’s caprolactam industrial chain relocation, upgrading and transformation development project reached 13.95 billion yuan, and a 600,000-ton/year caprolactam industrial chain was built, covering the entire industrial chain from coal hydrogen production to polyamide. Ketones, hydrogen peroxide, etc. all adopt new technologies independently developed by Sinopec. The project has been included in the 2020 key project management by the headquarters, and has also been included in the key projects of Hunan Province and the “Five 100” major industrial projects.